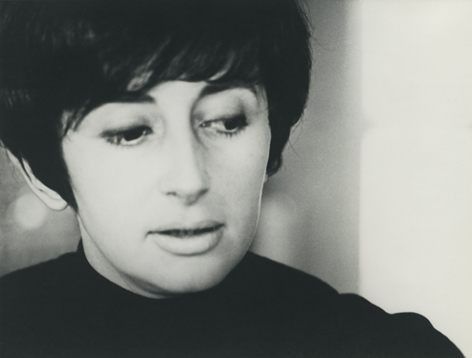 ‘There was a crusade to get rid of bouquets and chintzy prints on beige or fawn backgrounds.’ Pat Albeck

What a lucky girl I was to be able to attend the Fashion and Textile Museum when they had an evening with Pat Albeck. A small group of us got to listen to her talk intimately about her life in textile design, a real treat indeed. I had an awareness of Pat’s work, most notably her designs for Horrockses dresses in the 1950’s, I adore Horrockses and their iconic printed dresses so I was fascinated from the start. Her informal chattiness was lovely, now in her 80’s, Pat was dressed in her favourite bright orange and was really keen to dig into her memories for us all….

Pat Albeck, British textile designer, born in 1930, grew up with a love of design and decor. She was unsure what direction to take in life and went to study at art school in Hull where her family were based, she said she felt that all the other students were much better illustrators than her, she preferred to work with patterns and colour. She then got into the Royal College of Art, London. Her Father, luckily, had known the Principle there, she clearly felt she was not worthy of this place at the college as she remembered a critic once saying ‘even the Royal College makes mistakes’. One of her predecossors being the now iconic designer Lucienne Day, Pat’s time at RCA was around that of the Festival of Britain and designers wanted to revolutionize textile design. She said that she now believes she was at the college at the best possible time. Pat and her contemporaries wanted a new look to design, to move onwards from the floral cutesy and safe prints of earlier pre-war years. ‘I was very influenced by the new ideas in furnishing textiles from Scandinavia and the fashion fabrics from France and Italy’. This modern approach was an extremely exciting and pivotal movement in the design ideas of the 1950’s.

Pat loves flowers, she felt other designers could deconstruct flowers and strip them of their petals, making for abstract designs, she prefered to draw them more realistically whilst still in a new way. I got the impression from her talking that she felt inferior to some of the other designers at the time, ‘I think poeople thought, she’s ok but very commercial‘ she said. I think her work was as relevant and as new, but came from a slightly different and possibly more feminine angle than the likes of Lucienne Day and Marian Mahler.

In 1952, Horrockses designer James Cleveland Belle was visiting the RCA looking for talented students to work with him, he discovered Pat. Pat had been focusing her studies on furnishing fabrics, since fashion fabrics had been considered somewhat ephemeral at the time. Pat said she never thought of clothes as fashion, ‘I just thought of it as a new dress’. Pat recalled owning a Horrockses dress when she was 16, designed by Alastair Morton. I think every girl then probably dreamt of owning a Horrockses dress. Horrockses had previously been known mainly as a brand that sold quality cotton household goods; sheets, towels and bed linen, with the tag line ‘The Greatest Name in Cotton’. The company eventually concieved ‘Horrockses Fashions’ and it was for the fashion line that Pat sold her first design. She was one of the lucky few students to sell designs whilst still at college. This ‘Stripes and Roses’ was the first design she sold and it was also in her final RCA show. Horrockses were well known for their use of stripes on dresses, ‘It was exactly what he wanted’ Pat said, the design was used to make a housecoat designed by Betty Newmarch, this picture of it, Pat said, is still her favourite image of her time at Horrockses. 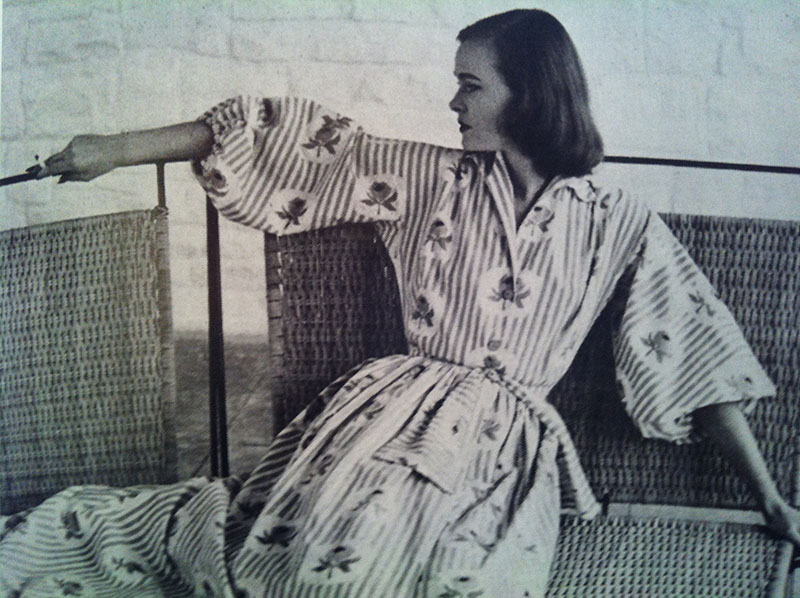 And so after graduating, Pat was offered a salaried position at Horrockses. From this point on in her career she said she pretty much always ‘designed with specific pieces in mind’ there was always a brief that she would work to. She clearly adored her time with the brand, during it she worked from home as they had no space at the head offices, but she was always present at design meetings and gatherings. She beamed as she referred to her team there as the ‘formidable four’; that four being designers John Tullis, James ‘Jimmy’ Cleveland-Belle (who she said is a great friend and genius), Marta Pirn and Betty Newmarch. These designers came up with the dresses while Pat designed the printed fabric…a formidable gang for sure!

Whilst being asked to design for specific garments, Pat told us about the time when Tullis asked her to draw a lobster for a beach skirt, she bought the lobster, put it through expenses and labouriously drew it but felt it looked odd on its own, so added her signature flowers and some butterflies. When the accountant saw her receipt for the lobster he joked ‘I hope you ate it after’ to which she replied ‘it took me three days to draw!’

In the late 1950’s British fashion manufacturing took a blow as far East countries began to mass produce man made fibres. To keep up with the increased competition, Horrockses parent company had to cut costs and needed to lessen the quality of their cotton. During this time James Cleveland Belle left, shortly followed by Pat in 1958. She said she still considers her work for Horrockses to be one of the most important times of her career.

Pat said that her favourite things to draw have always been ‘all things natural; fish, flowers, fruit and vegetables’ and she would often put a rose in there somewhere to ‘soften the motif’. I love the simplicity of her drawings and the casual element of humour too. After leaving Horrockses Pat went on to work for lots of different companies including Sanderson, John Lewis, fashion label Dolly Rockers and also The National Trust. It is with the National Trust that Pat famously designed many tea towels, the job perfectly combined her love of British historical houses and design. It evolved so that Pat was designing kitchen ceramics, table cloths and linens too, each for specific National Trust locations. Pat also did a lot of work in the 1970’s with a lady called Maxine Magan who started a cottage industry called Cuckoobird. This team were responsible for making lots of kitchen ware and home ware including the well loved cottage shaped tea cosy! 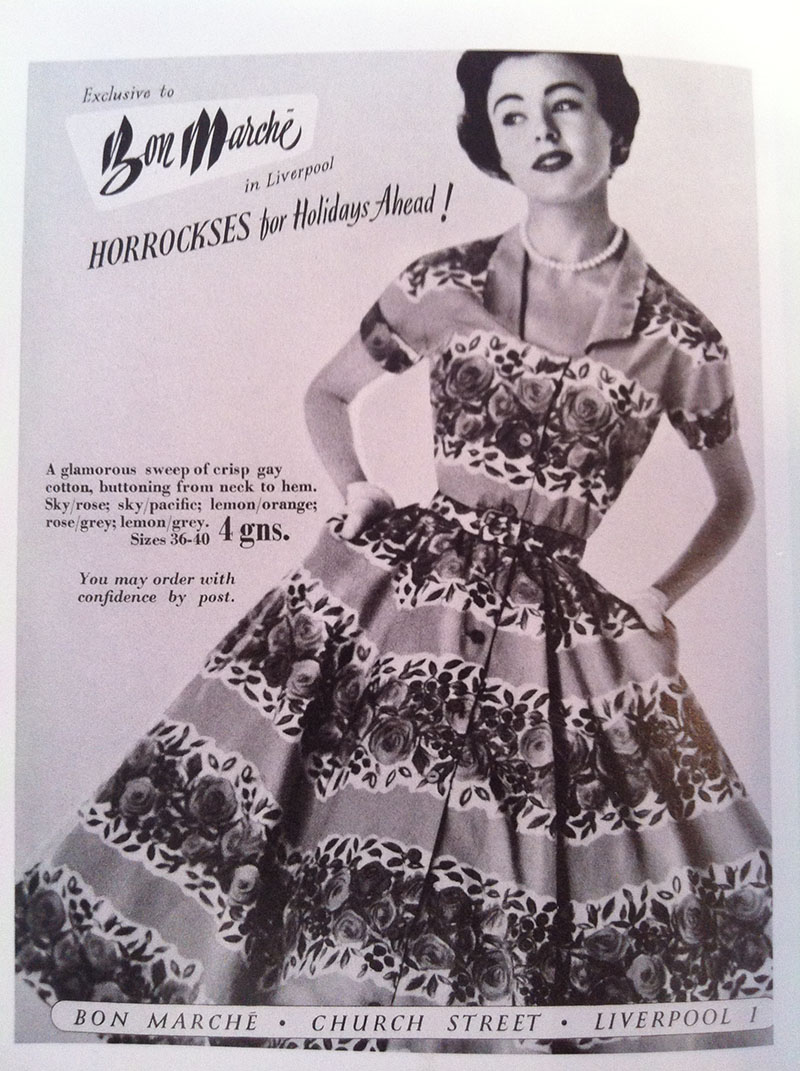 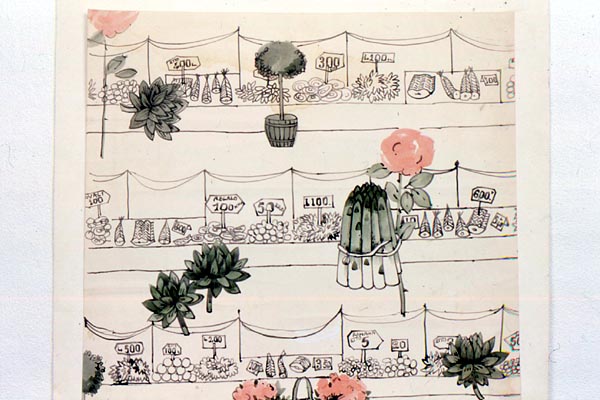 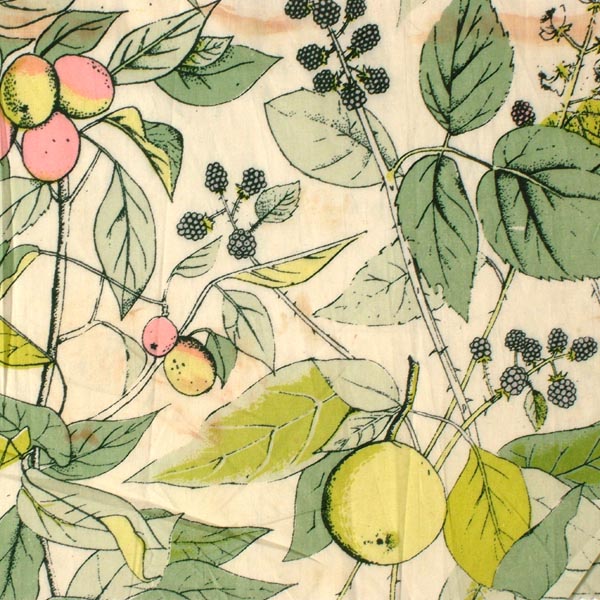 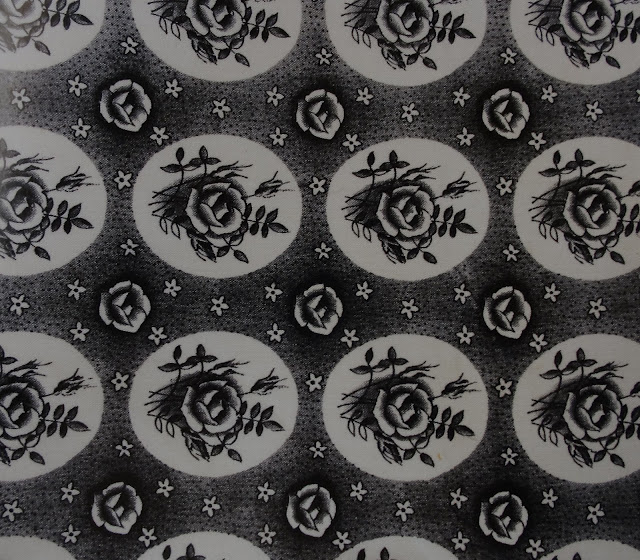 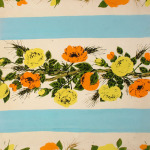 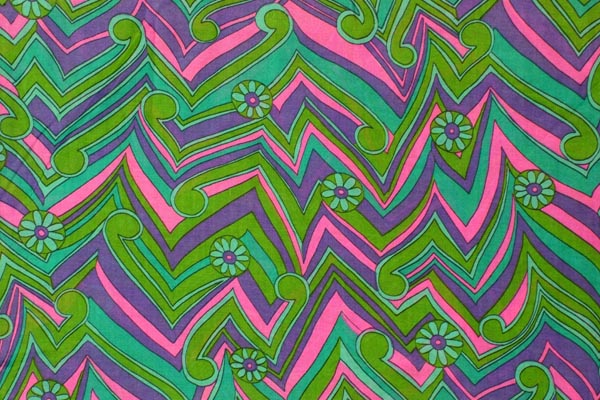 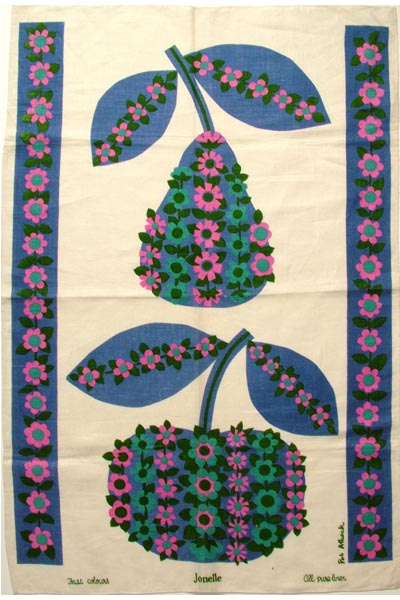 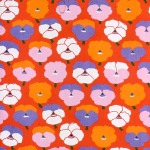 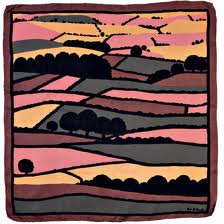 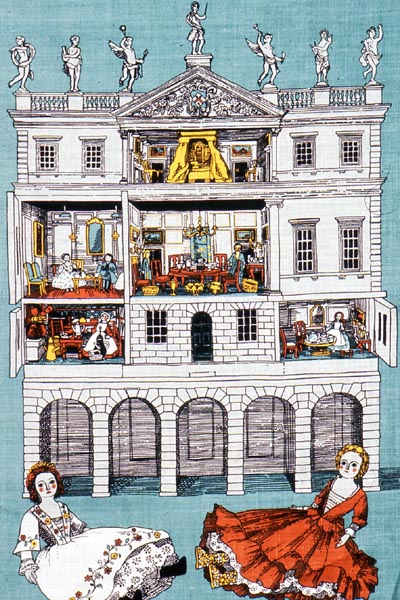 I especially like how Pat’s work in each era is totally characteristic of that decade and the style of the time, in vintage fashion, most pieces are clearly definitive of their time, and with Pat’s work you can see how the style and process of design has changed. Pat now lives in Norfolk, ooh same as me, she adores cats, same as me too, and still draws every day. She has a local exhibition later this year at Verandah, an independent artists shop here in Norwich which I shall take a peep at for sure. A funny fact about Pat is that her only son is married to another well known British designer, Emma Bridgewater, an eye for style is a quality that her son must love in his ladies. A gorgeous evening in the company of an utterly fascinating woman, she had nothing but good to say about her time working for Horrockses and all the other brands.

‘All the people I have worked with became my friends.’ Pat Albeck